So what is a variable? Well a variable allows us to store some information that we may want to manipulate or use. The variable is like a container where we put our information for use and retrieval.

Java comes with two types of variables to choose from, primitives and reference. In this lesson we look at the various primitive data types that are available in Java. We discuss Reference Variables in the Objects & Classes section.

Java is a strongly typed language and as such cares about the type of the variables we declare. So what does this statement actually mean? Well whenever you declare a variable in Java, you have to give it a type, or the compiler complains when you come to compile your code. You also have to name the variable and there are rules on naming.

Before we get into coding some variables lets look at the various types of primitives and the rules associated with naming them.

These rules apply to all variables, as well as classes and methods (collectively known as identifiers)


Click a link in the table below to show lesson usage for any keyword you're interested in:

Keywords marked with an asterisk (*) are not used.

Although not a rule as such it's also important to know that identifiers are case-sensitive.

Try this to test your knowledge of naming rules. We will go into the types as we go through the lesson but you should be able to pick out the invalidly named identifiers from the rules above.

The boolean type represents true and false values which are defined in java using the true and false reserved words. The boolean type can be initialized using these values, control the flow of an if statement and is returned from a relational operator. Lets write some code to see this in action. With your text editor open, cut and paste the following code into it.

In the tab at the top make sure you are pointing to the _BeginningJava6 folder we created in the last lesson.

In the File name: text area type BooleanType.java and then click the Save button and close the Notepad. 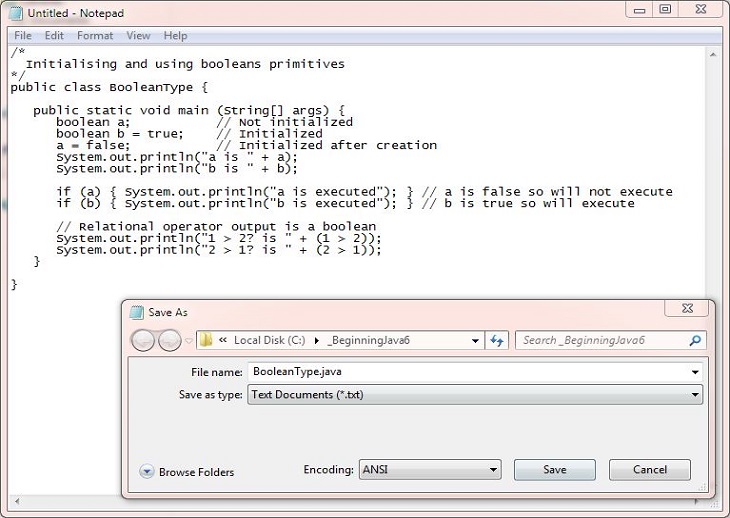 Compiling And Running Our Source File

You should see 5 lines of output as shown in the screenshot. The first two output lines display the values we set for our variables. The interesting thing to note here is the use of the + symbol, which is used in java to concatenate strings aside from its mathematical uses. The third output line shows the results of the second if statement we coded. We will go into this statement in the Conditional Statements lesson for now it's enough to know that statements contained within the curly bracers will execute when the expression being tested is true. The last two outputs test relational operators and output a boolean dependant upon the result.

Most computer languages use the standard 8-bit ASCII character set which has a range of 0 to 127 to represent characters. In Java the char primitive type is an unsigned type in the range 0 to 65,536 and uses Unicode. Unicode defines a character set that can represent any character found in any human language. The ASCII character set is a subset of Unicode and as such ASCII characters are still valid in Java. With your text editor open, cut and paste the following code into it.

You should see 3 lines of output as shown in the screenshot. The first output line displays the value 'P' that we assigned to our variable. The second output line shows the result of subtracting 12 from our initial value. The third output line shows the result of assigning integer 45 to our variable. Because the char primitive type is an unsigned 16-bit type we can perform mathematics on this type as if it was an integer, remember though the range is 0 to 65,536.

As you can see you have a choice of four different sized containers to store your integer values in. So using the correct integer type for your needs saves some bytes. You can assign one primitive integer type to another as long as the assignment is to a larger container. If you try to assign a larger integer type to a smaller the compiler throws an error and won't allow it. With your text editor open, cut and paste the following code into it.

Save and compile the file in directory   c:\_BeginningJava6

Ok the compile has failed with an error as shown in the screenshot and we get our first look at a compiler error. The reason for this is that when we pass a literal value to a long we need to append l or L to it or the compiler inteprets it as an integer. Because an integer has a range of -2,147,483,648  to  2,147,483,647 the number is out of range even though we passed it to a long primitive type. We will go into literals later in this lesson for now lets correct our code and append an L to it. I suggest always using an uppercase L when specifying a long literal as a lowercase l looks a lot like the number 1. So edit your code and add the L to the end of the number so you now have 3672543567L.

Save and compile the file in directory   c:\_BeginningJava6

Ok the compile has failed again with two more errors as shown in the screenshot above. The first error is because we have given the variable aByte a value of 128. The byte type range is -128  to  127 so this is out of range. Change this to 127 to fix this error. The second error happens because we are trying to put an int into a short. Even though the value contained in the variable anInt of 12 easily fits into the range of a short -32,768  to  32,767 the compiler just sees an int trying to be squeezed into a short and won't allow it. So let's change this to aByte from anInt as follows aShort = aByte;.

Well we got there in the end and as you can see the Java compiler isn't always as intuitive as we would like. Sometimes the compiler points to the wrong line or points to a place above or below the error. With practice you get used to compiler errors and you will get plenty of that as you write your Java code :).

Try this to test your knowledge of numeric integer types. Read down the list and check those you think will compile. Treat the list as a sequence of statements.

Floating-point types represent non-integer numbers that have a fractional component and come in two flavours as described in the table above. Floating-point types default to the double type unless we append an f or F when we initialize them. When this happens the compiler fails as it thinks we passed a double to a float primitive.

Above is the screenshot of running this code. Notice that the floating point doesn't display the F its just our way of telling the compiler this is a float primitive. The other interesting point is variable bDouble which is dynamically initialized at runtime from the other two variables

Java literals are values that are represented in their recognizable everyday form and we have been using them within our coding throughout the lessons so far. The table below gives examples of literals for each primitive type used in this lesson and introduces a few we haven't come across yet.

In this lesson we looked at the primitive variable data types available in Java6.

In the next lesson we look at method scope and what scope and its definition mean.

All the Java6 lessons are listed below. Click a link to go to that lesson.

Creating Our Own Exceptions