Java6 - An Overview of the The AWT and Swing Libraries

In this lesson we introduce the Abstract Windowing Toolkit (AWT) and Swing libraries with an overview of those parts of these libraries we are interested in to create our own GUIs within java.

The original GUI builder in java was the AWT which acted as a wrapper around the graphical capabilities of the host platform which meant developers had to be aware of differences in the host platform when using widgets from the AWT library. The different widgets that make up a GUI are known as components in Java and each of these are represented in the AWT by a class. Creating GUI applications built solely with AWT is a cumbersome approach to front-end development and the end results to the user are often slow response times. The AWT was also criticised for going against the grain of Java's platform dependency. With this in mind the Swing library was developed to ease the pain of GUI development and encompasses a set of lightweight Java components with pluggable look and feel capabilities that where possible work the same on all platforms, which fits in with Java's kudos of platform dependency.

Using a combination of Swing components and classes from the AWT, for actions such as event handling, we can write GUI applications that are independent of the operating system used. Swing components generally have the same name as the AWT components they derive from prefixed with a capital letter J.

The AWT and Swing libraries hold a huge amount of interfaces and classes that we can't possibly hope to cover on the site. The following diagram shows the parts of the class hierarchy we will cover on this site for the purpose of learning how to create our own GUI applications. 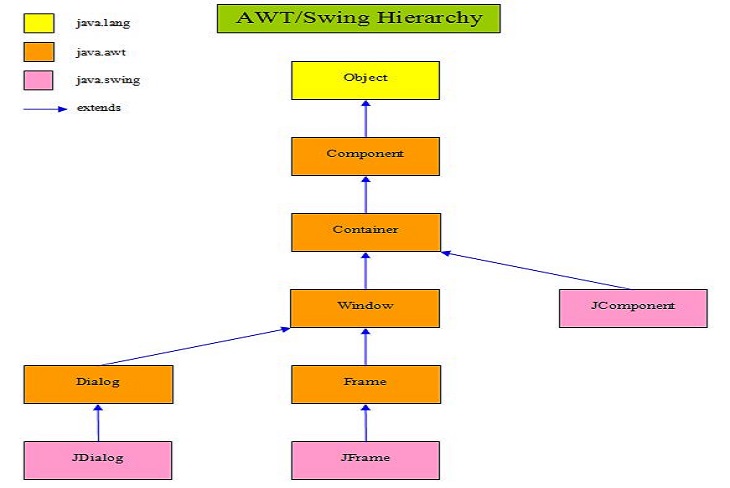 The table below gives a description of each class within the above diagram.

The following program lists the look and feel classes that were distributed with the version of the JDK I downloaded for the site which at the time was Java SE 7u25 for a Windows 64 bit system.

Compiling and running the program lists the following look and feel classes for use on my machine.

The first two classes in the screenshot above prefixed with javax.swing.plaf, correspond to the Java look and feel, are platform independent, intended to run on all platforms and are guaranteed to be in any SDK downloaded.

The third class in the screenshot above prefixed with com.sun.Java.swing.plaf.motif, correspond to the Motif look and feel and is intended to run on Unix platforms.

The fourth and fifth classes in the screenshot above prefixed with com.sun.Java.swing.plaf.windows, correspond to the Windows look and feel and are intended to run on Windows platforms.

The final line in the screenshot shows the LookAndFeel class that implements the default cross platform Java look and feel.

We can also set the look and feel to a custom skin or to one of the look and feel classes distributed with the SDK. Before we look at how to set our own skin the following screenshot shows how the default cross platform Java look and feel (Metal) displays using a simple frame on my Windows 7 system.

The following program sets the look and feel to Nimbus which is the other platform independent look and feel.

The following screenshot shows the results of running the SetLookAndFeel class on my Windows 7 system. We will discuss frames in the next lesson so we can skip over the code to create the window for now. To set the nimbus look and feel we are just passing a string of the classname to the UIManager.setLookAndFeel static method. The call can throw a ClassNotFoundException so we are wrapping the code in a try catch block.

In this lesson we introduced the AWT and Swing libraries with an overview of those parts of these libraries we are interested in to create our own GUIs within java.

All the Java6 lessons are listed below. Click a link to go to that lesson.

Creating Our Own Exceptions